Attract more hummingbirds with these plants

Shared from thespruce.com. Check it out to see more hummingbird plant photos.

Hummingbird plants are nectar-rich and tubular. To attract more hummingbirds and keep them coming back, plant some of the plants listed here. 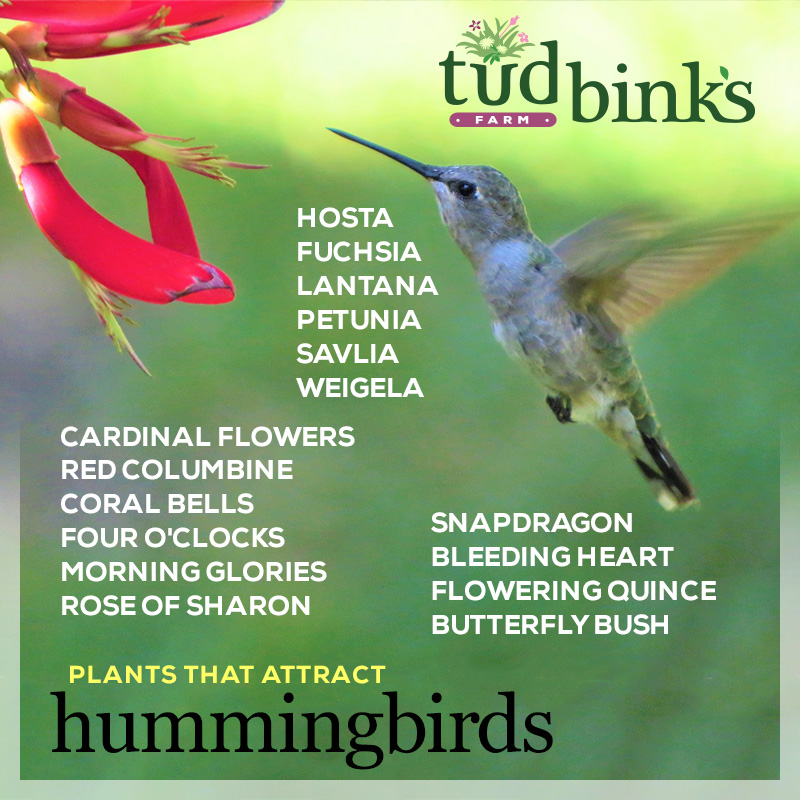 Agastache
There are many varieties of Agastache, and all of them are high in nectar. Agastache rupestris, shown here, is part of a group called the Hummingbird Mints. They are also butterfly magnets.

Cardinal Flowers
A great choice for adding drama to a shady corner, they are native in many areas. Hummingbirds can spot their vivid red flowers no matter where you tuck them.

Another native plant choice, also great for partial shade, is red columbine. Red columbine is so sweet, children often compete with hummingbirds, pulling the flowers apart for that precious drop of nectar.

Coral Bells (Heuchera sanguinea)
Who would have thought the delicate flowers of coral bells would be large enough to attract hummingbirds? Coral bells are a favorite of hummingbirds, but they only bloom once a season, and many gardeners cut them off, to put the energy into the plant’s leaves. If you want hummers to visit you, let them bloom.

There are many great perennials that will keep your hummingbirds happy. Choose a hosta with beautiful flowers, like the sweet-smelling Hosta plantaginea.

Four O’Clocks (Mirabilis jalapa)
Four O’Clocks do not open until late in the afternoon, but they are worth waiting for. Their tubular flowers are perfectly shaped for visiting hummingbirds.

If you’d like to get an earlier start, morning glories (Ipomoea tricolor) open with the sun and remain open until the afternoon heat. They also re-seed readily on their own, so although they are annuals, you often only need to plant them once.

Fuchsia
There are more than 100 species of fuchsia. Most of them are tropical or semi-tropical and are grown in many areas as annuals. The trailing varieties are perfect for hanging baskets and can attract a wide variety of visitors, wherever you hang them.

Lantana (Lantana camara)
Lantana is recommended for novice gardeners. It is a striking plant. Enjoy it as an annual; nice in containers.

Try Rose of Sharon (Hibiscus syriacus), also a woody shrub capable of being trained into a small tree and covered in flowers for weeks on end.

Petunia
Who hasn’t grown petunias? They’re a garden staple. The flowers are also the perfect shape for a hummingbird dinner. Some of the newer varieties are not particularly fragrant and may not have as much nectar as the older open-pollinated varieties, but give them a try. Petunias are natural creepers and often used in hanging baskets.

Savlia (Salvia cultivars)
New Salvia varieties are constantly being introduced, and they are wonderful for attracting hummingbirds and butterflies to your gardens. Whether the blues of Mealy Cup Sage (Salvia farinacea), ‘Black and Blue’ Anise sage (Salvia guaranitica) or scarlet Lady in Red, these hummingbird plants will blue virtually non-stop throughout the season.

Snapdragon (Antirrhinum majus)
Snapdragon flowers only snap shut on children’s fingers. Hummingbirds can navigate them with ease. Snapdragons are cool-season bloomers, attracting the first hummers to visit your garden and making an encore at the end of the season.

Bleeding Heart (Dicentra species) are equally charming to both gardener and hummingbird and like snapdragons, prefer cool spring weather.

Weigela (Weigela cultivars)
Weigela is making a big comeback, after being written off as a stuffy old shrub. New varieties have colorful and/or cut leaf foliage, giving them a long season of interest. Most also have flowers with the tubular shape favored by hummingbirds.

Flowering quince (Chaenomeles speciosa) is an even earlier bloomer, for the early bird, and butterfly bush (Buddleia davidii) will bloom throughout most of the summer.